“The data from a decade of renewable fuel use in Canada has shown that biofuels can reduce fuel costs for businesses and consumers, and the cost competitiveness of clean fuels will only improve as technologies, production, and use scale up.”

Advanced Biofuels Canada (ABFC) announced the release of detailed expert modelling of Canada’s Clean Fuel Standard (CFS). The modelling, conducted by Dr. John Kruse, Principal and Director of Quantitative Analysis at WAEES, represents a comprehensive analysis of Canada’s transportation fuel markets after implementation of the liquid fuel class CFS regulations in 2022. Four scenarios were defined to profile market demand for and use of biofuels in Canada, and to evaluate the feasibility, cost, and economic growth potential of the CFS regulations.

The four WAEES CFS model scenarios incorporated ECCC’s baseline fuel market data and the proposed regulatory approach for liquid fuels, as published by ECCC in 2019 and 2020. One scenario utilized ECCC’s target and trajectory credit estimates released in June 2020, while the other three scenarios tested impacts on biofuels markets and compliance credit costs if the market expanded credit generation in each of the three credit categories: fossil fuel improvements (CC1), biofuels (CC2), and electric vehicles and other fuel switching platforms (CC3). As a global partial equilibrium model, each scenario incorporates real world data on the supply, demand, and commodity market prices for feedstocks and biofuels to determine the production, use, import, and export levels of biofuels in Canada and estimate marginal CFS compliance credit prices in each year.

Results, based on the defined scenario frameworks, establish significant potential to increase production and use of advanced biofuels in Canada. In all scenarios, the CFS is expected to create minimal change in liquid fuel markets in the early years of the regulation (2022-2025), allowing time for new investments to expand advanced biofuels production capacity and upgrade infrastructure assets to support distribution of low carbon fuel blends to Canadian consumers. Market use of the primary biofuels modeled (biodiesel, hydrogenation-derived renewable diesel (HDRD), and ethanol) increases gradually over time and, by 2030, remains comparable to established blend rates in other regulated fuel markets (e.g., British Columbia, California, United States, Europe, Brazil). 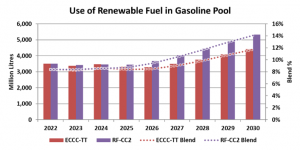 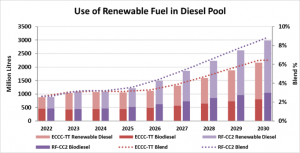 “Given that Canadians rely on billions of litres of imported gasoline, diesel, and jet fuel in our western and central markets (British Columbia to Quebec), expanding the use of advanced biofuels creates a win-win outcome for Canada. Investments in new production capacity in Canada will drive jobs and economic growth in rural agricultural and forestry communities and lessen our dependence on imported fossil fuels. Clean fuel use will immediately reduce greenhouse gas emissions from cars, trucks, ships, and airplanes,” said Ian Thomson. “The data from a decade of renewable fuel use in Canada has shown that biofuels can reduce fuel costs for businesses and consumers, and the cost competitiveness of clean fuels will only improve as technologies, production, and use scale up. This new modelling affirms the indispensable role for advanced biofuels in Canada’s 2030 emissions reduction plan and is a strong foundation to transition to net zero transport emissions by 2050.” 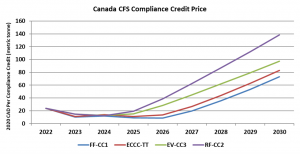 “The CFS credit value modelling demonstrates the feasibility of this regulation,” stated Ian Thomson. “The low values – when compared to other low carbon fuel standards – reflect the fact that the current CFS design includes a broad array of compliance credit generation options, including fossil fuel emissions reductions that will be achieved under other regulations and pollution pricing systems, and the anticipated growth in electric and hydrogen fuel cell vehicle use. On top of this, obligated parties will access credits through defined flexibility mechanisms.”

“The WAEES modelling indicates biodiesel and ethanol production capacity in Canada could more than double by 2030, and over 1.4 billion litres of new renewable diesel capacity could be established as well,” said Ian Thomson. “At this stage, until the draft regulation is released, it is too early to know if the demand signal will be clear enough – or strong enough – to attract the necessary capital investment to build this capacity in Canada.”

“We believe Canadians want access to a rigorous analysis of potential greenhouse gas reductions and the costs and benefits of the CFS. The model accurately represents ECCC’s current regulatory design for liquid class fuels and tests various market responses in the context of real-world global demand, supply, and costs of fossil fuels and renewable fuels. In addition to establishing a detailed profile of Canada’s fuel markets to 2030, this modelling incorporates the range of emissions reductions that will be achieved by Canada’s oil and gas producers and expanded use of carbon capture and use or storage technologies which are now commercialized. The modelling also tests how the expanded use of electric vehicles, or other transport fuel switching platforms, will impact fuel and credit markets. Finally, WAEES has incorporated ECCC’s other compliance flexibility options, such as cross-stream credit trading and compliance fund payments, to build a realistic framework to evaluate demand for fossil fuels and biofuels out to 2030. Across all scenarios, it is clear that Canada has a huge opportunity to scale up production capacity of biofuels and other non-fossil clean liquid fuels – we’re just completing economic modelling of the impact of expanding domestic production of clean fuels and will release this work in the coming weeks.”

“The WAEES CFS modelling represents a preliminary, but detailed, portrayal of the regulation,” said Ian Thomson, President of ABFC. “We’re making the model results and data available to all stakeholders, to inform the public policy discussion on the impacts and opportunities from clean fuels. We invite industry groups, academics, climate stakeholders, and governments to review the modelling, and contribute to future refinements. ABFC will release an updated version of the model following release of the draft liquid CFS regulation details.”

The full report on the WAEES CFS modelling, with information on the WAEES model and methodology, is available here. ABFC’s media backgrounder provides additional information, graphs, and detailed results. Please contact Tim Auger, Director of Research, at tauger@advancedbiofuels.ca if you wish to receive the underlying data tables and charts.